Brown
George Tarleton was a leading scientist of A.I.M. who became the organic computer M.O.D.O.K. (Mental Organism Designed Only for Killing). Tarleton was born in Bangor, Maine and raised in Erie, Pennsylvania. He was a founding member of Advanced Idea Mechanics or A.I.M. for short. The CEO Aldrich Killian focused on biological enhancement, while Tarleton focused on technological advances. In 2010, he was recruited into Project Pegasus to research the Tesseract and find a way to tap into its infinite cosmic power, however, the project was rendered defunct in 2012. After Killian died and his acts of terrorism were exposed, Tarleton became the CEO of A.I.M. and spent years undoing the damage done by his former colleague. Tarleton redirected the focus of A.I.M. away from Killian's Extremis, and instead started a number of projects to put the organization back on track, including unlocking mental potential.

After the transformation, he was to be known as M.O.D.O.C. standing for Mental Organism Designed Only for Computing. He quickly eliminated his competitors for leadership over AIM, and became their full-time commander. He was then known as M.O.D.O.K.: Mental Organism Designed Only for Conquest. As leader of AIM, he has had confrontations with Captain America, Iron Man, S.H.I.E.L.D. and the Avengers.

M.O.D.O.K has formed an alliance with Baron Helmut Zemo to achieve world conquest. He has since worked on many projects with Zemo. 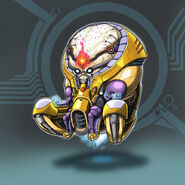 Add a photo to this gallery
Retrieved from "https://ultimate-marvel-cinematic-universe.fandom.com/wiki/M.O.D.O.K?oldid=26593"
Community content is available under CC-BY-SA unless otherwise noted.